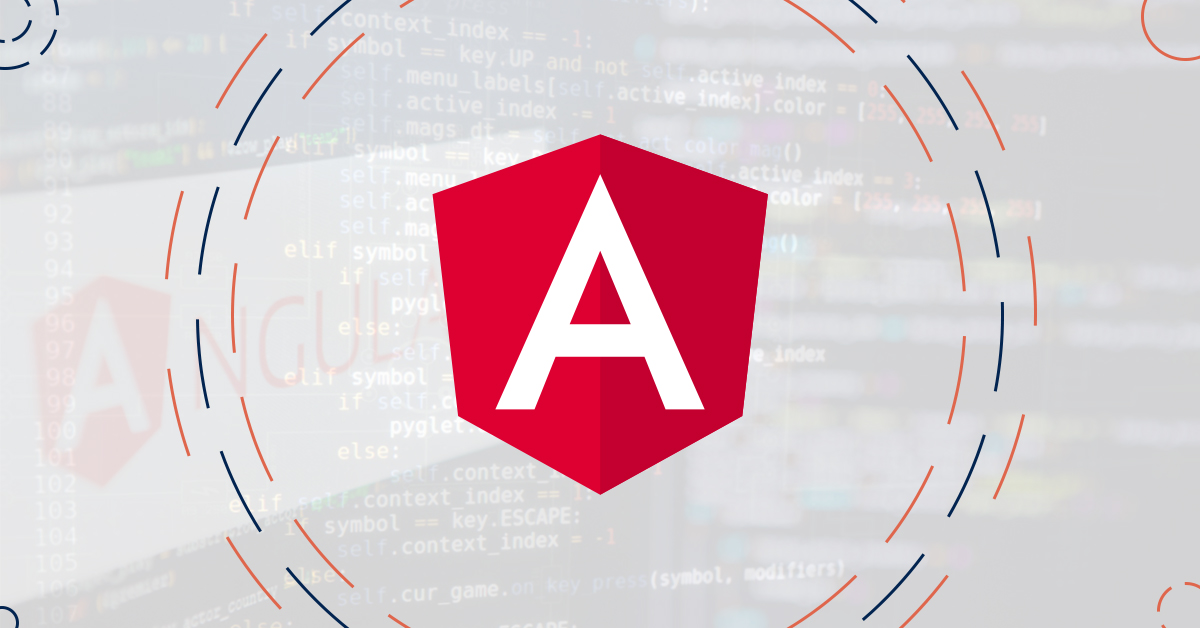 Why Business and Web Developers Should Use Angular Framework

Angular is an open-source, popular JavaScript-based framework, written in TypeScript. It was introduced back in 2010 by Miško Hevery at Brat Tech LLC. The overriding purpose of this front-end framework was to develop dynamic modern web applications. It offers rich user experiences, code maintainability, and fast responsiveness.

Here’s feedback, How Angular framework is notable among developers? 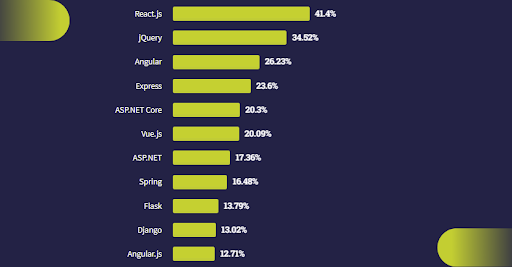 How Did Angular Elapse:

Looking at history, the initial release was Angular 1.0 it was in the alpha or unstable phase. Later in 2010, the Google team and community developers introduced the latest release of angular named AngularJS. The major release of this transition was to decouple DOM manipulation from application logic, the client-side of application from the server-side, and more. In 2016, the stable version Angular 2.0 was introduced with some minor changes.

Angular 4 & Angular 5 were officially released in 2017, this version was backward compatible with previous versions of angular. Here listed some major changes:

As the earliest version of this framework was AngularJs, it differs from the current version(Angular 13) a lot. Later in this upgradation, multiple versions came Angular 2, 3, and so on till now, the latest version Angular 13.1.1 – released on  December 15, 2021. Every succeeding update on the Angular version was improved and more powerful than its predecessor in terms of compatibility, scalability, and maintainability. 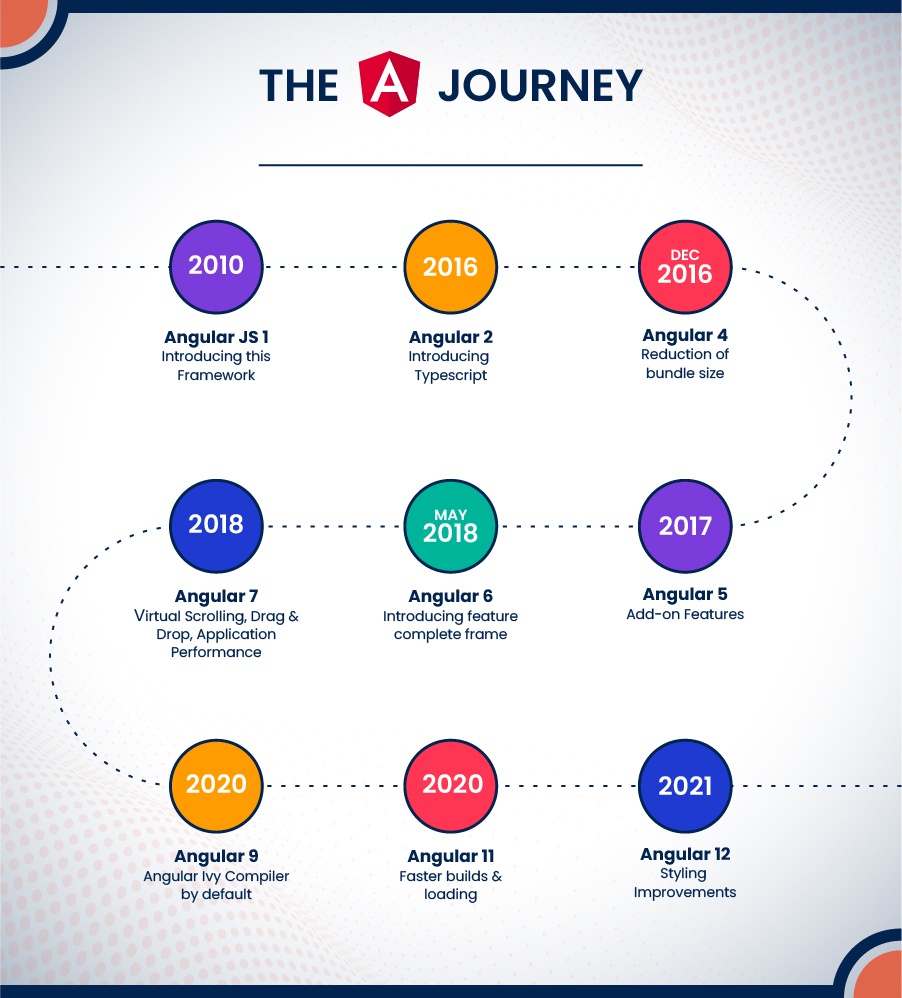 As an angular web development company, we are familiar with the fact that Angular is taking on a vital role in application development. We can acquire remarkable features by using this updated angular version. This stable release has a lot of improvements and more assistance for developers. The below-mentioned points are the key changes in Angular 13.

As angular is one of the merging frameworks, businesses and software development agencies become effective to dispense quality services. Therefore, Angular helps to design responsive UI with core business logic. Now, let us discuss facts about this framework from both business and technical perspectives.

According to Stackoverflow developers survey 2021, using angular has provided answers to many businesses. Why should you go for an angular framework? Yes, to build attractive web applications. This survey shows almost 26% of professional developers use angular for their projects which is one of the satisfying numerals.

Google acquired angular, aimed for their official use to support their revolutionizing projects and internal systems. Later on, it was made open-source to the global community of developers. Angular updates come after almost six months, containing small changes for each new version.

There is a huge community of developers around Angular, they suggest changes and share their ideas to improve angular in upcoming updates. Angular specialists innovate new ideas to tackle upcoming challenges and find ways to resolve these problems. The community contributors suggest currently facing issues, their feedback or solution, in consequence, it improves angular. 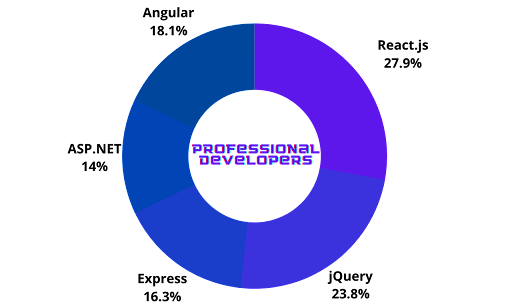 If it’s an eCommerce platform, food industry, finance sector, business websites, or email services, Angular is favorite to everyone, being used worldwide. There are numerous multinational companies that are using angular in their businesses to improve user experience and push their businesses to the next level. Angular is used as the frontend of the MEAN stack, consisting of MongoDB database, Express.js web application server framework, Angular itself, and Node.js server runtime environment.

It helps to implement business logic in a very efficient manner in a company of inspiring UI. Google, Microsoft, Sony, Samsung,  PayPal, Grasshopper, Delta, Visa, Forbes, and many more are using angular in their projects.

On a report of developer surveys, 2019, 2020, and 2021: From more than 3 years Angular emerged as one of the industry’s favorite frameworks to give a high level of  UI experience. Angular has grown an ecosystem around it, to deliver entrepreneurs and developers. Google is continuously working to improve angular with new modules and components to enable less code and SEO-friendly UI.

In conclusion, Angular has the power to produce high-quality, versatile, and frictionless web, mobile, or desktop applications. It is not just a framework but a well-developed platform to build a full-fledged application. It helps to design solutions like:

Although it has some limitations, in contrast, it provides several benefits to developers. Moreover, several multinational companies around the globe lodge this tool into their projects due to deliverability and community support.

if you enjoyed reading about the Angular framework advantages, its evolution process and want your business online using this framework. Our Angular developer’s expertise will give birth to your idea as a well-developed online application. Don’t hesitate to book your appointment, Esketchers team is always 24/7 here to facilitate you.