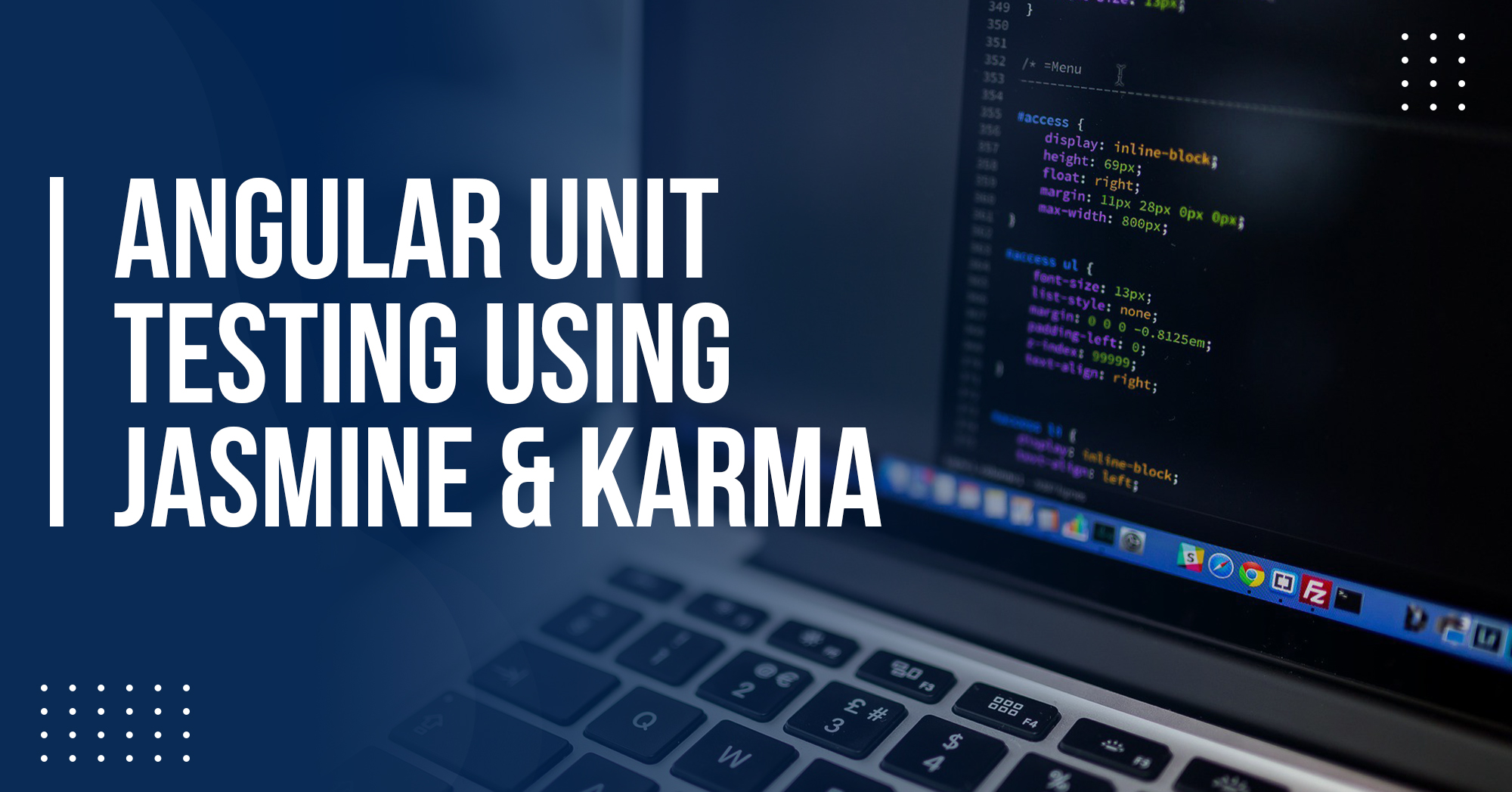 Test-driven development is the single most powerful tool you have for preventing bugs within your application. That’s not my opinion but it’s a scientifically proven fact that in exchange for effort and productivity you get better quality software that is more maintainable long-term. Lucky for you angular comes with jasmine and karma so Angular unit testing is really easy to get started.

In this post, I’ll give you a tour of angular testing tools by using a sample project. We’ll cover the following topics:

What is Angular Unit Testing?

It refers to testing the business logic of a small and isolated unit of code to verify the correctness of its behavior. You are going to test the code which you have written it will take care of code coverage whether you have covered all the scenarios or not. Unit testing ensures that all code meets quality standards before it’s deployed. This ensures a reliable engineering environment where quality is paramount. Throughout the product development life cycle, unit testing saves time and money and helps developers write better code, more efficiently.

Jasmine is an open-source testing framework for JavaScript.

It does not require any other JavaScript framework.

Jasmine has easy-to-read syntax, making it easy to understand.

Jasmine has tested double functions called spies, A spy can stub any function and track all calls to it and its argument.

Karma is an open-source test runner for JavaScript created by the angular team.

Karma can be easily integrated into your project and makes it easy to execute tests using CLI.

Karma is useful for executing the tests on browsers, other devices like phones, tablets.

Karma can be configured with different test frameworks including  Jasmine, Mocha, Quit.

Karma can be configured with continuous integration tools like Jankins, Travis, or Semaphore.

Looking for an Angular Development Team?

To create a new Angular project run the following command:

After entering the above command you will ask for angular routing and stylesheet format. Select your choice. 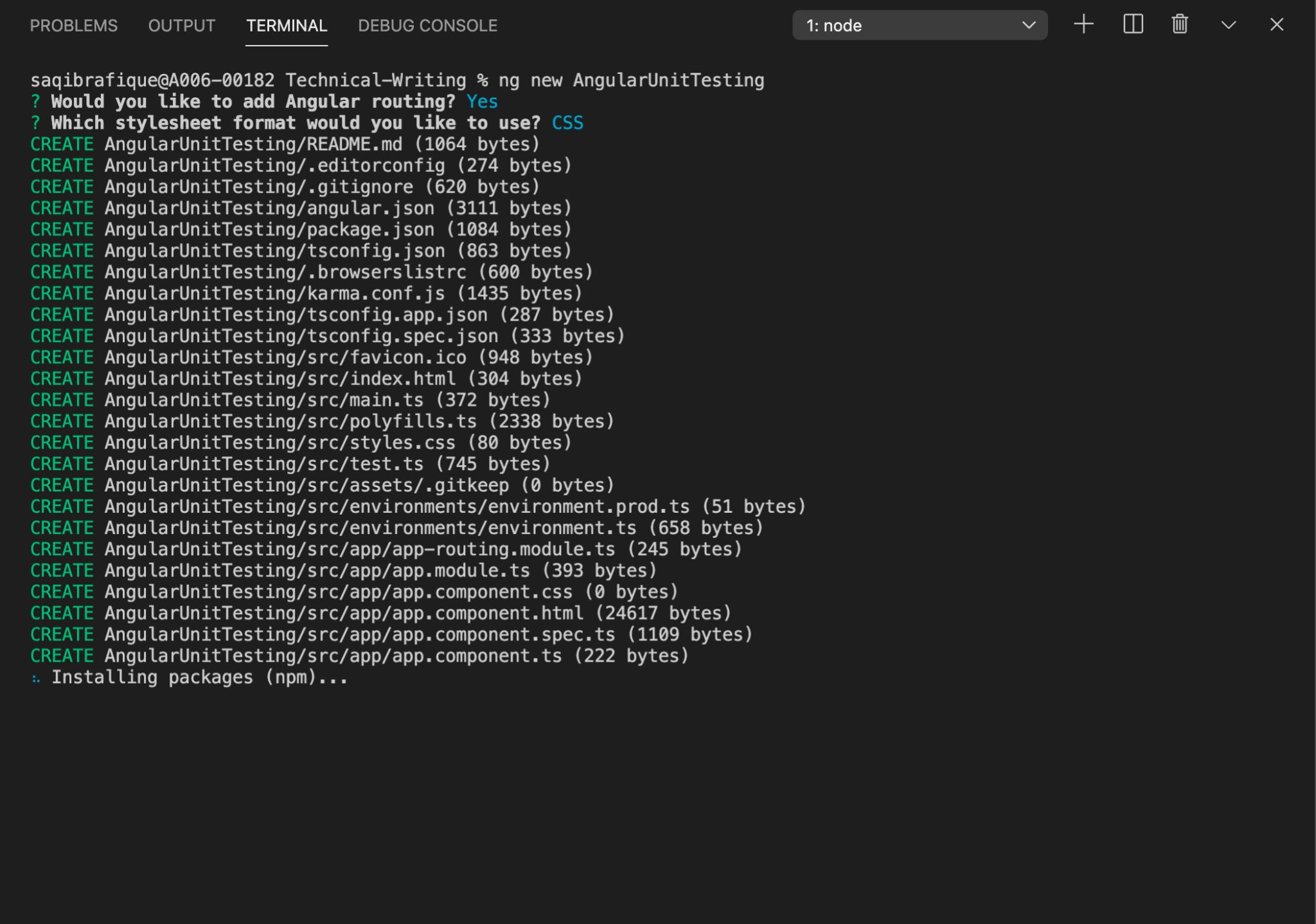 When packages will install successfully then you have a project with an app and many other files as follows: 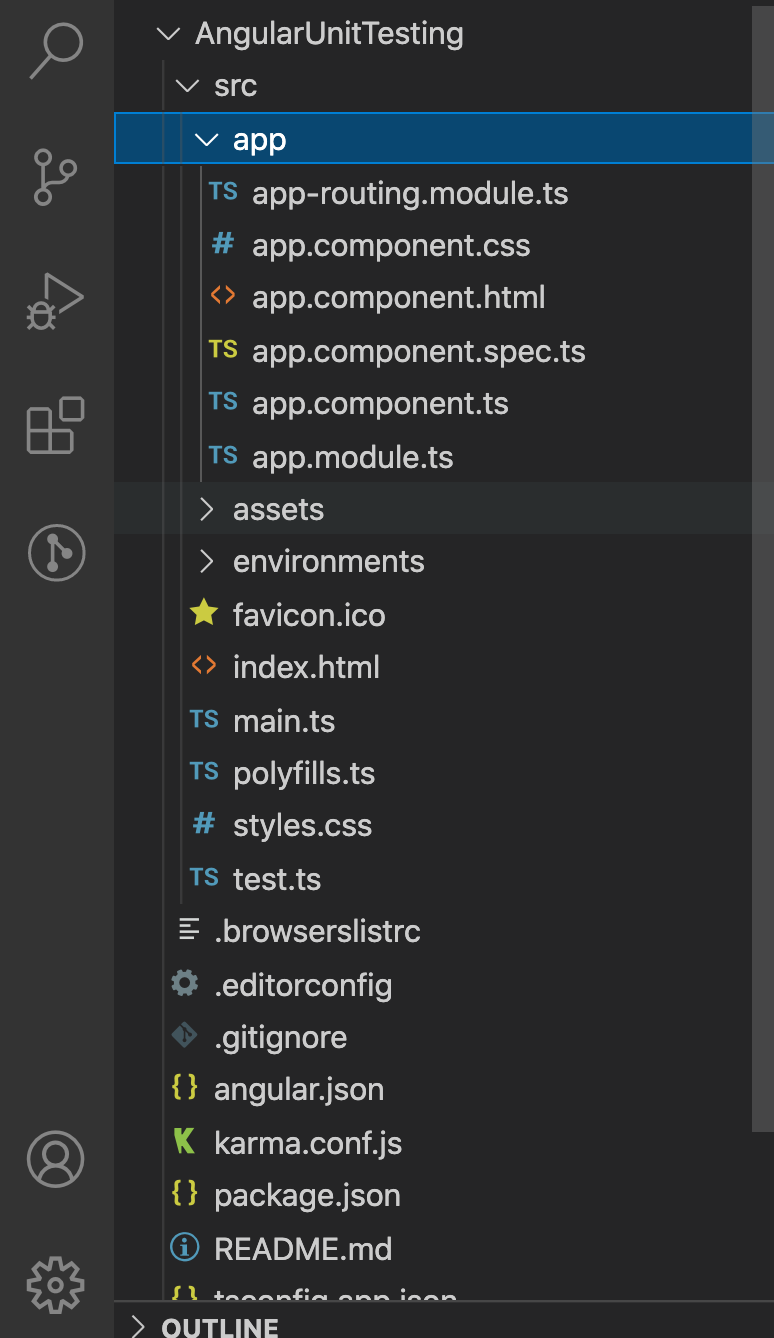 As you can see we have a file named app.component.spec.ts. This is the file that is used to perform unit testing and we have a different test written by default as follows:

This spec file is the actual file where our Jasmine code will run. When we are generating a new component, module, service, pipe, or service then this spec file will always be generated. Here you can see there is a test suite that is already written for our component and in this suite three test cases will show us how our app will be tested. To run the sample test we need to run the following command:
ng test

This command will execute the test cases by using Angular CLI and show us results on a web browser: 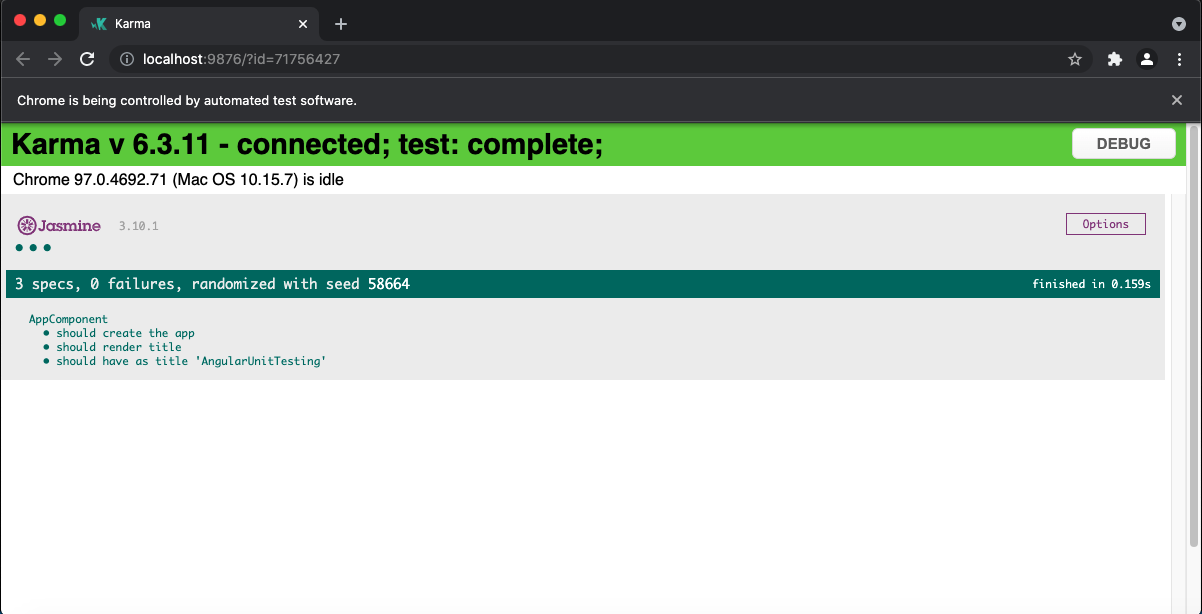 As you can see our three test cases are succeeded. In this report, we have test cases and their status with execution time.

Frameworks is a list of the testing frameworks we want to use. These frameworks must be installed through NPM as a dependency in our project or/and as a Karma plugin.

Files are a list of files to be loaded into the browser/testing environment. These are loaded sequentially, so order matters. The file list can also take the form of a glob pattern as it becomes rather tedious to manually add in a new file for each new testing script created.

In the angular2-redux-starter karma.conf.js we have put the testing files we wish to include in a separate file – src/tests.entry.ts, which includes a required call using a regex pattern for importing files with the .spec.ts file extension. As a project grows larger and the number of files to include grows in complexity it is good practice to put file imports in a separate file – this keeps the karma.conf.js file cleaner and more readable.

Preprocessors allow for some operation to be performed on the contents of a unit testing file before it is executed. These operations are carried out through the use of Karma plugins and are often used for transpiling operations. Since we are writing unit tests in TypeScript, .ts files must be transpiled into plain Javascript in order to run in a browser-based environment.

In angular2-redux-starter this process is done with webpack, so we explicitly invoke the webpack processor on all of our testing files (those ending with .spec.ts). We also load any source map files originating from transpilation through the sourcemap processor.

Using webpack, we can configure how to bundle our unit tests; that is, whether to pack all tests into a single bundle, or each unit test in its own bundle, etc. Regardless, unit tests should not be bundled with the rest of the applications code (especially in production!). In angular2-redux-starter we have opted to bundle all unit tests together.

coverageReporter is used to configure the output of results of our code coverage tool (our toolchain uses Istanbul). Here we have specified to output the results in JSON and HTML. Reports will appear in the coverage/ folder.

Reporters is a list of reporters to use in the test cycle. Reporters can be thought of as modular tools used to report on some aspect of the testing routine outside of the core unit tests. Code coverage is an example of a reporter – we want it to report on how much of our code is being tested. There are many more reporters available for Karma that can aid in crafting your testing workflow.

Port, browsers and singleRun configure the environment our unit tests will run under. The browsers property specifies which browser we want Karma to launch and capture output from. We can use Chrome, Firefox, Safari, IE, or Opera (requires an additional Karma launcher to be installed for each respective browser). For a browser-less DOM instance, we can use PhantomJS (as outlined in the toolchain section).

We can also manually capture output from a browser by navigating to http://localhost:port, where the port is the number specified in the port property (the default value is 9876 if not specified). The property singleRun controls how Karma executes, if set to true, Karma will start, launch configured browsers, run tests and then exit with a code of either 0 or 1 depending on whether or not all tests passed.

To execute the test case we need to have a functionality to be tested. So, let’s create a new file named firstFunction.ts. Here we have a function addition that is taking two parameters firstNumber, secondNumber and return the addition of these two numbers. Now I want to test the functionality of this method by writing the test case in a spec file. We need to create a spec file for this named firstFunction.spec.ts.

In the first unit-test case, I want to test whether our addition function will work fine or not. So to do this I need to import that function in our spec file and then call that function in it block with parameters (10, 20) It should return 30. We can test this by using the Jasmine function expect(), which will verify whether the incoming output is equal, contain, toBe an expected output or not. It is going to help us to assert that the functionality returns the given output. Finally, our spec file will look as follows:

To run the spec file we need to write the command ng test. After execution of this command you can see the updated report will generate by Karma on the browser as follows:

As you can see now we have a new test suite with the description ‘Test Addition’ and under this suite, we have a test case ‘should add two numbers’ passed. So congratulation our first test case is executed and passed successfully. Now let’s try to fail our test case by expecting a wrong value. 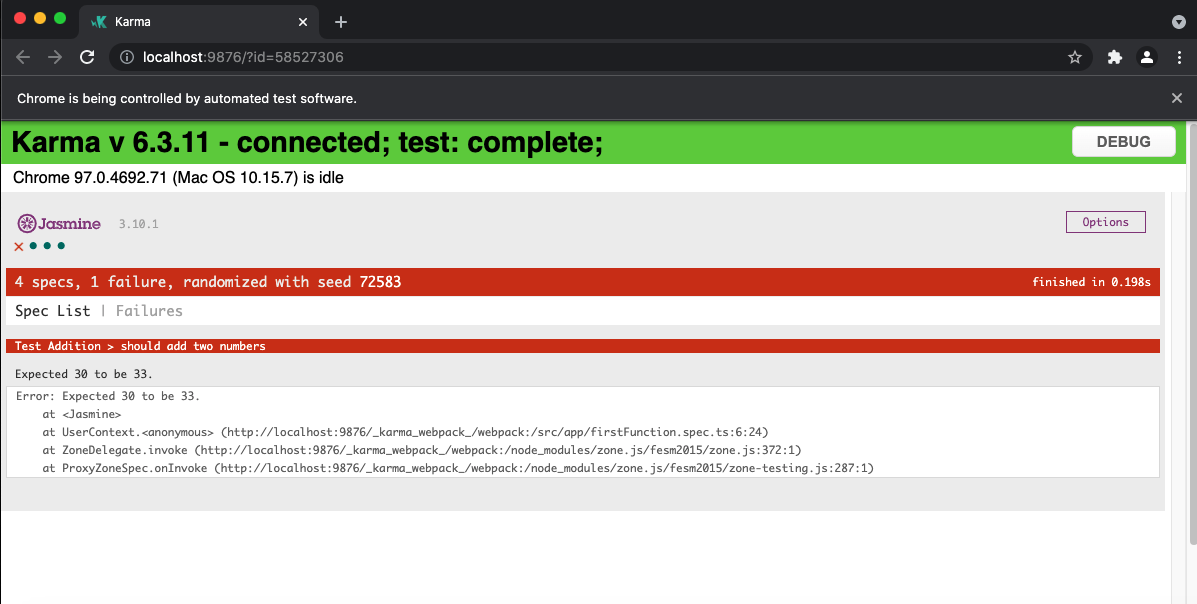 As you can see now one test case is failing as we are expecting the addition of 10 and 20 toBe 35 which is wrong and reflected by our Karma report.

Understand, How to Test an Attribute Directives

An attribute directive can modify the behavior of an element, component, or another directive.

This command will ask you for the name of the directive and then create a directive for you.

Along with the .ts file you have the .spec.ts file created for this directive. Our directive will look as follows:

Here we are getting input from the element and changing the behavior of the input and the element. On MouseOver and MouseOut our div element will change the behavior. We need to test whether our directive will work fine or not. To do this we need to use this HelloDirective in a component and then write test cases in that component. Let’s create a new component for this purpose by using the command:
ng g component custom-directive.

Now we have a new component, here we will get input from a user and then show that input to the user and check our directive behavior as well. For validating the directive behavior we need to write test cases in the custom-directive.component.spec.ts file.
In the beforeEach function for our test suite, we configure a testing module using the TestBed class. This creates a test Angular Module which we can use to instantiate components, perform dependency injection, and so on.The testBed is a mock environment to run Angular 2+ component tests without the browser. TestBed.createComponent() creates an instance of the Component, adds a corresponding element to the test-runner DOM, and returns a ComponentFixture.
So, in our test suite, we have some default test cases written for the component. We will add new test cases for directive testing. First, verify that only div will be visible when to Submit button will click and next verify the innerHTML, backgroundColor of the div as follows:

Next, we’ll check the mouseOver and mouseOut event of the element by the test case.
So finally, our Karma is also updated with new test cases added as follows: 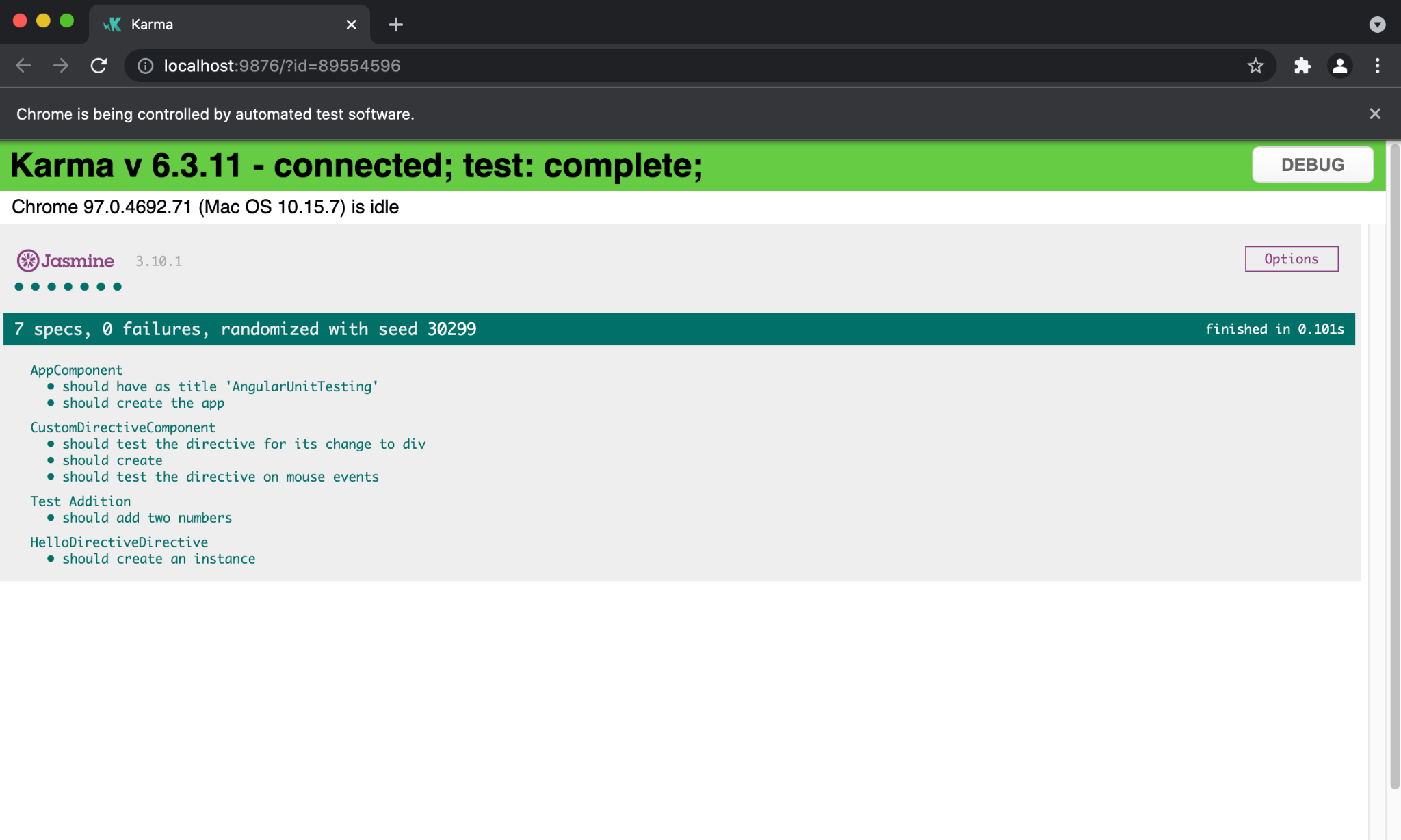 We’ve covered Angular unit testing. You’ve learned more about the fundamentals of unit testing, and how to use best-of-bread tools—such as Karma and Jasmine—to perform efficient Angular component testing. Overall, Angular unit testing saves time, helps find bugs early, and inspires confidence in your application’s code. Angular ensures that test results are viewed in your browser. This will give a better visualization of the test results.

The source code for the project is available on Github profile.