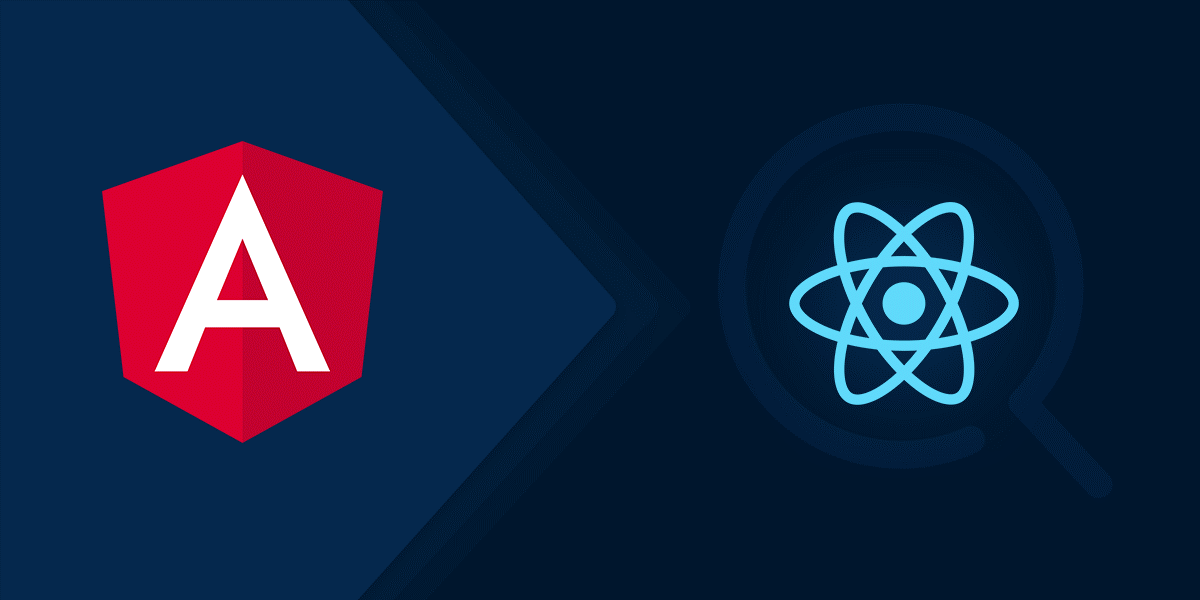 Angular vs. React: Which One Should You Pick? – A Detailed Comparison!

In this digital era, web development has become the next big thing – growing over 15 percent every year now! And when someone says web development, the first thing that springs to mind is Javascript.

This is because the JavaScript ecosystem has been dominating the domain of web development for over a decade now. Today it is one of the most popular languages of the modern era.

Want to know its popularity? Take this; there are over 1.8 Billion websites globally, and JavaScript is used on 95% of them.

The discussion of the JavaScript Ecosystem is lacking without mentioning the two most admired frameworks, Angular vs. React. Both are front-end frameworks with their unique intrinsic benefits.

But now you’d ponder, which one should you choose for your next project between Angular vs. React? Both the frameworks have their own set of features and advantages that makes it even hard to pick one between the two: Angular vs. React

If you are in a pickle and unsure which one to plump for, this blog is for you. We will comprehensively talk about both frameworks and compare both of them.

Let’s begin with the basics… 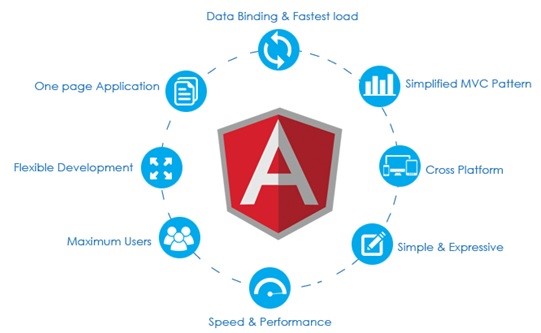 Angular is an open-source structural framework written in Typescript for dynamic web applications. Google developed Angular back in 2010, and since then, Angular has continued to ace heights of popularity. Two-way data binding and dependency injections are some of the distinctive characteristics that contributed to its success.

But what does this platform include? Here is what:

Fundamentally, Angular is a framework that aims to build single-page applications by employing HTML and Typescript. Angular architecture is dependent on some fundamental concepts. To mention some: (brace yourself for technicalities!!)

·         A component can delegate certain tasks to services, such as fetching data from the server, validating user input, or logging directly to the console. By defining such processing tasks in an injectable service class, you make those tasks available to any component.

Fun fact: Angular derives its name from the fact that the HTML tags are enclosed by “angle” brackets. 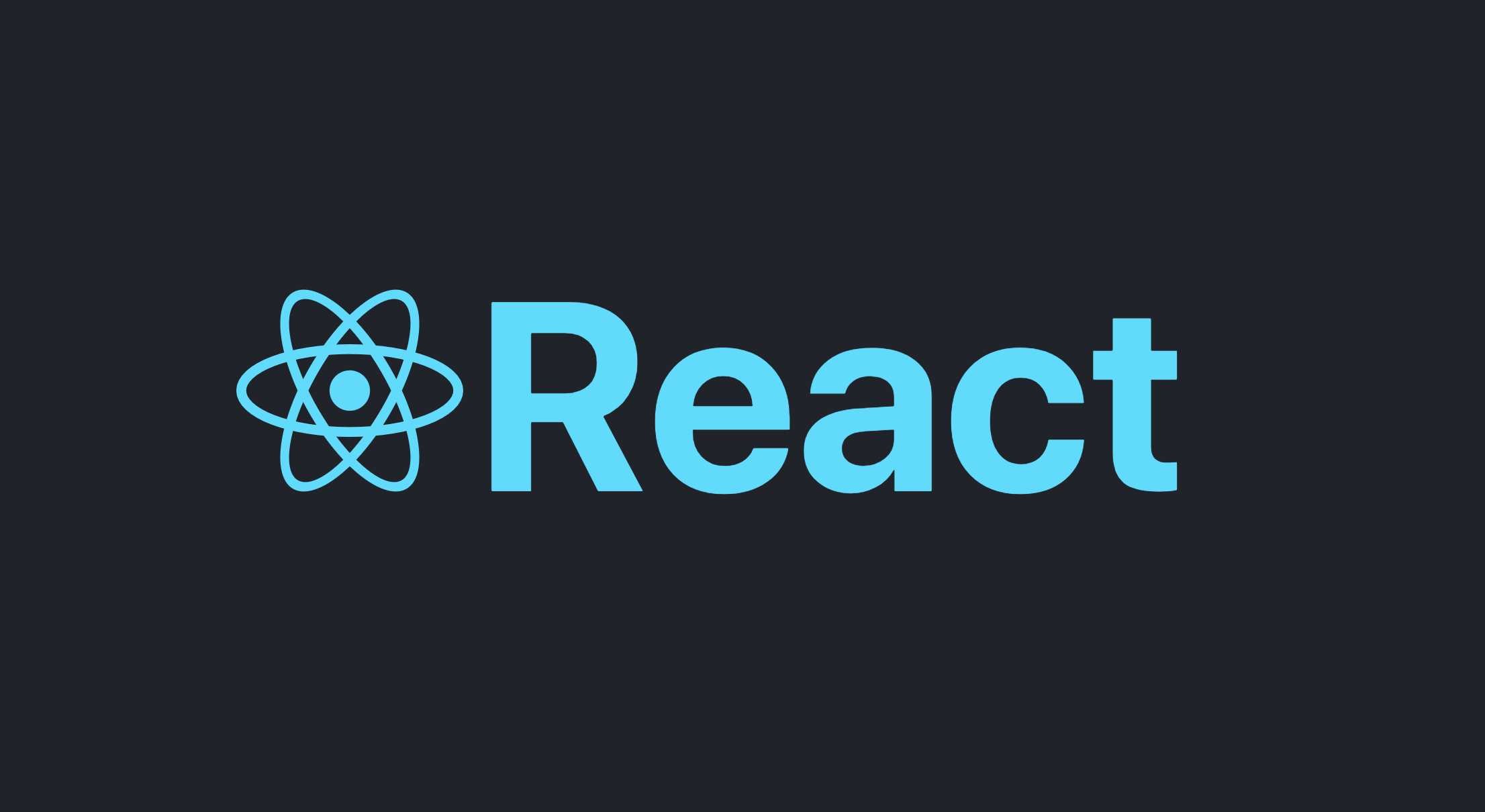 Maintained by Facebook (now Meta) and introduced in 2013, React is an open-source JavaScript library used for building user interfaces. React is credited for popularizing the web-based concept called component-based architecture. It is fraught with a legion of benefits. Here is a brief glance:

Due to its component-based architecture, React swept the market in no time and overtook most of the frameworks available in the market. According to one survey, 40.14 percent of respondents reported using React.

Furthermore, React’s principle of “learn once and write anywhere” makes it an attractive option for the community of developers. This approach allows a developer to share syntax and code structure knowledge to other platforms such as mobile development with React Native without the need to relearn an entirely new structure and can also lead to being able to reuse lots of logic.

Before we dive into the comparison between Angular vs. React, a little history lesson first!

Previously known as FaxJS, React was developed by Jordan Walke, a software engineer at Facebook. It was later open-sourced in 2013. Facebook and Instagram went ahead to release React 16.0 in 2017.

Later on, Facebook set in motion React Fiber; the goal of React Fiber was to become the bedrock of future improvements.

Let’s peek into the history of Angular now!

The first version of Angular came to the forefront in 2010 and became the pioneer of modern front-end app development. Not perfect, though, but catered to common software development standards.

2.0 version was released in 2016, also called Angular, to avoid confusion among the developers. 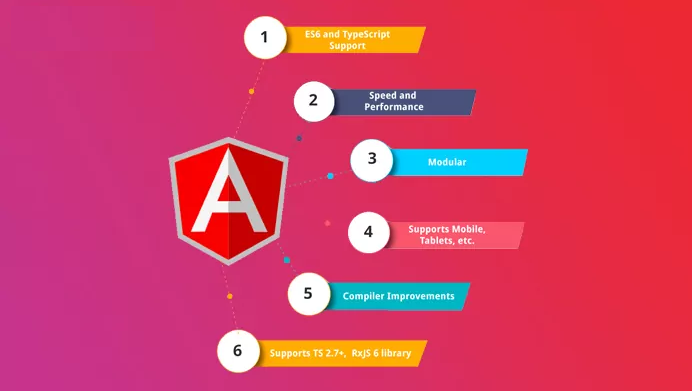 Angular is your go-to framework to develop progressive web applications (PWA) – renders experience like a real app. It also allows you to develop apps for desktops.

Angular turns your templates into code giving you all the benefits of hand-written code with the productivity of a framework. The loading speed of Angular is commendable. On top of that, Angular intelligently splits the code as per the user’s loading requirements.

Angular prioritizes user experience; you can make a range of front-end applications and create astounding animations. In addition, angular offers intuitiveness in such a way that you can produce complex animations with low code.

As compared to other frameworks, Angular is a low code platform. Not just this but Angular offers clean development as well. Angular takes a much more opinionated approach on code structure eg. for forms, route guarding etc, which tends to create a much more consistent and structured code base.

Two-way data binding is one of the most important features that set Angular apart. The View and Model layers stay in perfect synchronization. A change in the model will automatically reflect that in the view model. This process results in a faster development time. 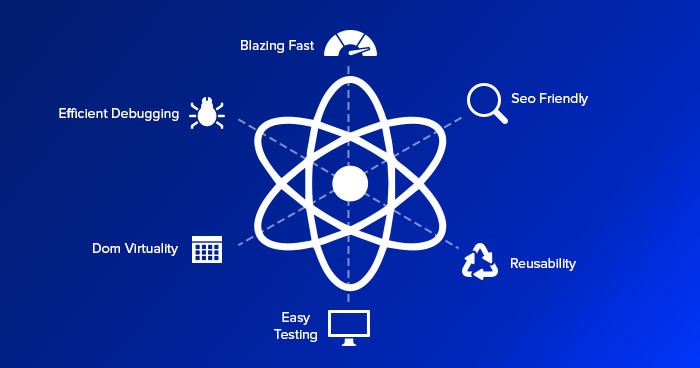 The characteristic virtual DOM speeds up the process of app development along with rendering flexibility. The replication of the web page is facilitated in React’s virtual memory. Virtual DOM is essentially a copy of the real DOM. Whenever a rerender is required React recomputes the Virtual DOM identifies the manipulations required in the DOM tree and efficiently implements onto the real (visible) DOM.

The flow of data in React is unidirectional. This means that developers have to manually implement callbacks to sync state upon any user interaction as compared to angular’s two-way data binding which can sync data on both sides (state to UI and UI to state).

JSX files in React make the code simple and easy to understand. As mentioned before, the component-based structure in React makes the code reusable.

React manages a Virtual DOM which exists in the memory. The concept of Virtual DOM along with a minimal rerendering policy makes React a great performer out of the box.

If you want to create full-fledged UI applications, React has impressive extensions for that. Extensions speed up app development and give you a beautiful UI.

But what is Angular vs. React basically used for?

If you aim to build enterprise-level apps like progressive web apps, then Angular has your back. But if your goal is to build attractive UI components with oft-variable data, then React is your go-to library.

Between the both, the learning curve of Angular is steeper due to its multitude of in-built functionalities. But we have just touched the tip of an iceberg. Angular vs. React are as different as chalk and cheese.

For better understanding and comparison, we will lay the common ground for both the frameworks on which we can compare both of them together.

Let’s get into it.

When it comes to React, it offers one-way data binding. This means that if you modify a UI element, the component’s state is not affected.

But what purpose do they serve?

Angular is a framework with incredible features. It helps you in designing your applications. It is complemented with tiny libraries that assist in developing complex applications.

If you are concerned with the UI components, then React will serve this purpose. You have enormous flexibility in organizing your code.

Angular is built with Typescript – a superset of JavaScript. It is a statistically typed language that transpile to JavaScript during the build.

Angular: It has incremental DOM. It works in a way that whenever a new DOM is created, it compares with the preceding one and applies the changes to the actual DOM – only dispensing the memory.

In the case of React, there is virtual DOM. This means that whenever you make changes to the DOM, virtual dom is compared with the updated dom to decide the re-rendering needed and those components are re-rendered

In Angular, Dependency injection is a design pattern in which a class requests dependencies from external sources rather than creating them. You can use Angular dependency injections to increase flexibility and modularity in your applications.

Angular has some excellent UI component libraries which you can use to make better user interfaces for Angular applications.

One of the keys for the growth of React is the array of React component libraries. Developers have developed beautiful user interfaces for web, desktop, and hybrid applications using easy-to-use libraries.

When comparing the speed of Angular and React, React can generally provide a much better out-of-the-box performance generally due to its minimalist complexity and state handling architecture, Angular, however, has also seen many continuous performance upgrades through recent versions.

Angular has a steep learning curve. Its modules system is quite complex and requires a good command of several languages and intricate concepts like pipes and templates.

As compared to Angular, React is relatively easy to learn. You can develop apps quickly in the ecosystem.

In-built functionalities make testing easy in Angular. Hassle-free testing is also made possible by the integration of testing tools and dependency injections in Angular.

When it comes to React, The React Testing Library is a very lightweight solution for testing React components.

Here is a cursory glance at Angular vs. React comparison:

Let’s have a look at the advantages of Angular below:

At the same time, it has its drawbacks. Here they are:

Here are the pros of React that makes it highly attractive for developers:

Contrarily, there are numerous disadvantages of React, which are as follows:

When Should You Choose Angular?

Overall, you can opt for Angular when you have to design apps for all kinds of environments, especially:

When Should You Choose React?

It would be best if you choose to React for the below-mentioned cases:

Angular and React both hold considerable popularity in the developer’s community. Since both the frameworks are popular we cannot gauge their popularity by just Google trends alone.

Let’s assess from a different parameter:

We will first talk about the number of stars they have received on GitHub repositories. Angular received 76.6K stars, while React had 175k stars. If we only consider GitHub as a benchmark, then React is ahead of Angular.

Below is the visual representation of the number of stars they have acquired. 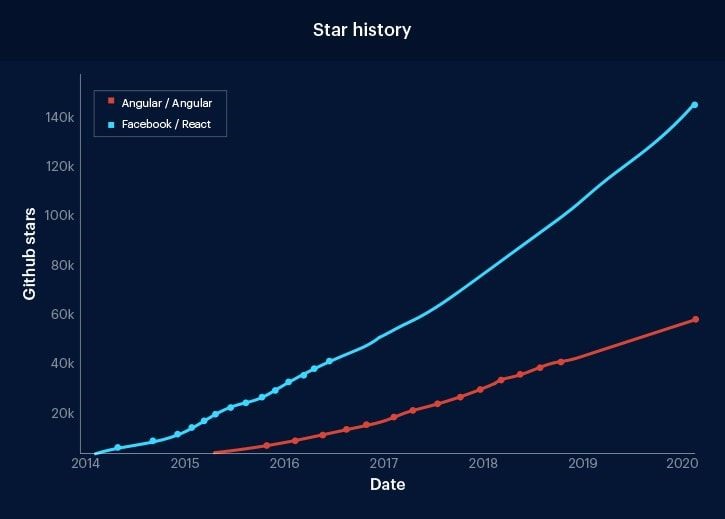 But don’t jump to conclusions just yet. Another way to judge popularity between Angular vs. React is their demand in the job market.

The chart below shows the popularity comparison between the two in job demand. 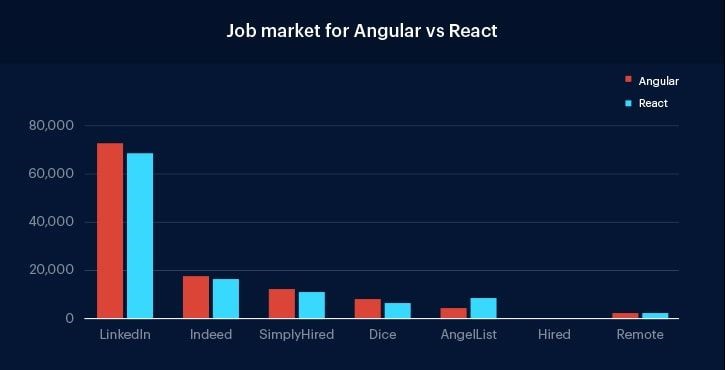 Now let’s have a look at which tech giants use Angular and React in their development ventures:

There are numerous frameworks out there that make it even hard to pick the right one for your next project from Angular vs. React.

But when it comes to choosing between Angular vs. React, it all depends on your personal preference.

This is because both of these frameworks tackle the same problem but in their own unique way. But in a nutshell, Angular gives you more in-built functionalities, and React has a smoother learning curve which allows you faster development.

Generally, Angular is mostly used to build complex enterprise-grade apps like single-page apps and progressive web apps, while React is used to build UI components in any app with frequently variable data

Apart from this, React is an easy way of getting the job done. Angular, on the other hand, is capable of handling a lot more on its own.

If you are looking for a team of experts in Angular or React for your next projects, reach out to us.