React Advantages – Why Choose it for Your Project

With the surge in the popularity of JavaScript, it’s no wonder that ReactJS has taken the web development world by storm due to the countless advantages of React js. This powerful tool offers countless benefits to developers, making it an essential part of any modern web development stack. But with so many options out there, it can be tough to choose the right framework for your project. In this article, we’ll explore some of the top react advantages to help you decide if it’s right for your next project.

ReactJS is a popular JavaScript library that helps developers create powerful user interfaces. It is based on the concept of components, which are small pieces of code that can be reused throughout an application. This makes it easier to maintain and scale complex applications. Another advantage of ReactJS is that it also has great performance due to its virtual DOM implementation and allows developers to quickly build high-performance user interfaces.

ReactJS was created by Facebook in 2013 and has since become one of the most popular libraries for developing web and mobile applications. It is used to create components for both native and web applications, making it a versatile tool for any type of development. ReactJS also supports server-side rendering, which enables faster page loads and better SEO optimization.

The Advantages of React JS

ReactJS is also known for its wide range of features that make it easier to work with. It has an intuitive API, excellent documentation, and a large library of third-party components that can be used in applications. Developers have access to tools such as the React Developer Tools Chrome extension, which can be used to inspect and debug components.

ReactJS is an excellent choice for modern web and mobile applications, as it is easy to learn, provides great performance, and has a wide range of features that make development easier. It also has a large community of developers who are constantly contributing to the library’s success. For these reasons, ReactJS is becoming an increasingly popular choice for developers.

Let’s have a detailed look at some of the most prominent React advantages. 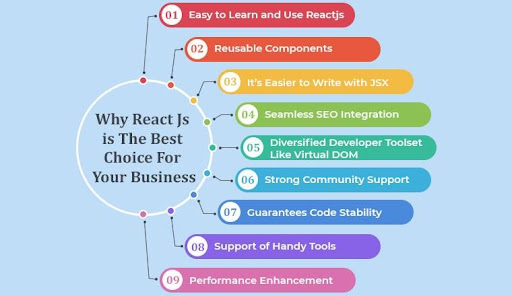 Another unique advantage of ReactJS is that it also enables developers to write code more efficiently with its use of a virtual DOM (Document Object Model). The virtual DOM is faster than a traditional DOM because it only updates the necessary parts of the interface in response to user interaction. This makes it more efficient than other frameworks, as developers don’t need to manually update the entire DOM after every user action.

ReactJS also uses server-side rendering to improve the speed of an application. This is done by pre-processing and rendering the components on the server before they are sent to a user’s browser. This makes ReactJS applications faster and more responsive, especially when dealing with large amounts of data.

One major advantage of using React is its declarative nature. That means the UI will adjust when you change your app’s state by interacting with DOM, which makes it easier for developers and other team members who may not be as familiar with coding techniques because they can easily follow what’s going on in code without feeling overwhelmed or lost.

ReactJS is declarative because it allows you to create components that are self-contained and reusable. When you use ReactJS, you create small, self-contained pieces of code that describe what a particular component should look like. This makes it easy to create complex user interfaces without having to worry about how all the pieces fit together.

ReactJS has strong testing capacities. Because ReactJS is declarative, it is easy to create tests for individual components. This makes it easy to verify that each component is working as expected. Additionally, ReactJS allows you to use pseudoclasses and stateless components, which makes testing even easier.

ReactJS is easy to test because it allows you to create small, self-contained pieces of code. This makes it easy to isolate the component you are testing and ensures that your tests are accurate and reliable. ReactJS also makes it easy to create mock data so that you can test your components in isolation.

In a world where Google’s Web Core Vitals are becoming more important for search engine visibility, using lightweight frameworks is an easy way to make sure your application can load quickly. React has been proven time after again as one of the fastest ways in doing this with its capability and ability. 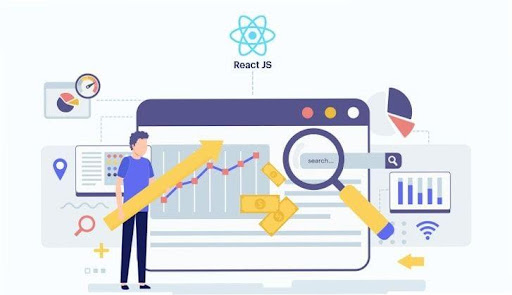 Community support of ReactJS is another great reason to use the platform. ReactJS is an extremely popular library and users are eager to help out fellow developers with their issues. There are a plethora of helpful forums, tutorials, and support sites that users can visit in order to get assistance on a coding conundrum they may be experiencing.

In addition, there are thousands of open-source components and libraries available to developers, helping them save time and energy when building projects. Furthermore, many of the most popular online coding services such as CodePen and JSFiddle have integrated ReactJS into their systems, making it even easier to use and develop. Community support is key in any development platform and ReactJS has it in spades.

Amongst numerous React advantages is the quality of scalability. The platform was designed to be able to accommodate large-scale applications and is well-suited for complex projects. Developers can easily create components and reuse them for different sections of the project, saving both time and money in the process.

Furthermore, ReactJS offers developers a number of tools for debugging their code – such as Chrome Developer Tools and React Developer Tools – allowing them to quickly identify any issues they may have.

React advantages also include the feature of being mobile-friendly. It allows developers to create mobile applications with native-like performance. It’s also faster and more efficient than other JavaScript libraries, which makes it attractive to developers.

In addition, developers can use ReactJS to create modular components that are reusable and consistent throughout the application. This means less time spent re-writing code and more time focusing on the look and feel of the application. Also, components are isolated and can be reused within an application or shared with other applications. This improves the efficiency of code reuse and reduces the development time for a large project.

Additionally, ReactJS components are highly customizable, enabling developers to manipulate and reuse them in different ways within an application. This flexibility helps developers create complex user interfaces quickly and easily.

In conclusion, ReactJS is an incredibly powerful and versatile platform that can be used to create complex applications with minimal effort. Its clean and organized codebase makes it easy to learn and use, while its community of helpful developers and plethora of available resources make it an ideal choice for developers looking to get the most out of their projects.

Its expansive scalability, debugging capabilities and performance improvements also make it an excellent choice for developers who need to create large-scale projects. All in all, ReactJS is a powerful and versatile platform that has a lot to offer developers of any skill level.

In javascript, state management is one of the hot discussion topics. Managing the state in the frontend can be difficult if you are not adopting […]

Over the years, React is the most popular frontend javascript library. Startups to big companies are using this technology for the fastest web development. Due […]