The front-end development industry is constantly changing, and new website design options emerge every day. Businesses can get confused when choosing between various libraries or frameworks because each has its own set of pros and cons.

In recent years, developers found themselves seeking out an alternative more suitable than AngularJS, which had become popular until recently, but now there’s another option: React…

ReactJS is one of the most popular and widely used libraries for building user interfaces. It’s declarative, efficient, and easy to learn, making it a great choice for developers of all skill levels.

In this post, we’ll take a look at some of the reasons why the Reactjs front end is so popular, as well as some of its key features. So whether you’re new to React or simply looking to brush up on your knowledge, read on!

Should You Choose ReactJS?

If you’re looking for a modern front-end development framework, ReactJS is a great option. ReactJS is an open-source JavaScript library that allows you to create dynamic user interfaces. Millions of developers now use ReactJS worldwide, making it one of the most popular frameworks.

Let’s take a closer look at some of the most critical factors of Reactjs front end development needs.

There’s no simple answer to the question of whether ReactJs is secure. On the one hand, ReactJs is based on JavaScript, which is a fairly secure programming language. On the other hand, ReactJs is a relatively new framework, and any new technology comes with some inherent security risks.

That being said, there are a number of measures that you can take to help ensure that your ReactJs application is secure. For example, you can keep your dependencies up to date, use a secure coding style guide, and employ various security tools to scan your code for potential vulnerabilities. Taking these precautions can help reduce the risk of security issues in your ReactJs application.

But most experts agree that React is a powerful technology that is generally safe and secure front-end development that will help you create your next enterprise application!

The rich ecosystem of tools and technologies, such as redux or flux with Node.js on the backend, make ReactJS a robust framework for building scalable and easy-to-test applications.

One of the benefits of ReactJs is that it is scalable. Scalability means handling the increased load by adding additional resources, such as servers. ReactJs is scalable because it uses a virtual DOM, which means that only the changed components are re-rendered. This makes Reactjs front end apps fast and responsive.

When a user interacts with a ReactJs app, only the changed parts of the UI are updated, making the app more responsive. Another reason why ReactJs is scalable is that it can be used with server-side rendering.

Why Use React for Front-end Development?

ReactJs is fraught with benefits, making it an excellent choice for front-end development. Let us explore a few benefits that React JS renders:

ReactJS was built with speed and performance in mind. When building user interfaces, the framework allows developers to break down complex tasks into smaller components that can be reused throughout the application. This makes it easy to keep track of code changes without having to recreate each page from scratch whenever there’s an update.

Additionally, ReactJS only re-renders components that have changed, ensuring that the application remains fast even when dealing with large amounts of data or frequent updates.

Another reason why use Reactjs front end development is its ease of use. Compared to other frameworks such as Angular or Vue, ReactJS has a much simpler syntax, making it very approachable for beginners and experienced developers. The library also has several helpful tools that allow developers to get started quickly without worrying about setting up a build environment or dealing with complicated configuration files.

Furthermore, ReactJS has excellent documentation and community support which makes it even easier for developers who are just getting started with the library.

Another great thing about using ReactJS is its scalability – thanks to its component-based structure, developers can easily add new features or refactor existing ones without impacting other application parts.

Additionally, since components can be reused across multiple projects, creating large applications becomes less time-consuming compared to other frameworks, where each page has to be built from scratch every time an update or new feature is added.

Due to its modular nature, ReactJS offers great flexibility when it comes to creating custom solutions that fit your specific project needs. React has grown from being a library for building scalable user interfaces to something much more than that. It can be used on any platform with an application, whether a web app or not! And thanks in part due its flexibility, React continues evolving as well.

React allows developers to integrate it even into existing apps because of its library approach, giving them the freedom to choose from different tools.

Is ReactJs easy to learn? The answer is yes! ReactJs syntax is quite simple and easy to understand, and because it’s so widely used, a lot of documentation and resources are available. This means that you can find answers to any questions you have.

Furthermore, to save you the pain, ReactJs comes with an easy-to-learn interface. In general, though, ReactJs is considered to be easy to learn, especially if you already have some experience with JavaScript. 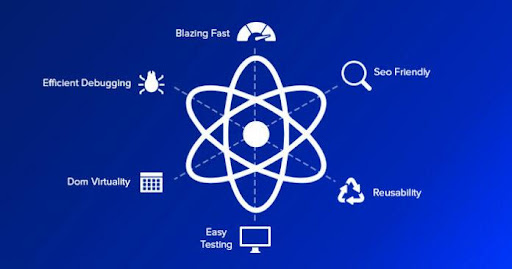 When to Use React for Front-End Development? – The Use Cases

React is a popular JavaScript library for building front-end web applications. Many online resources will help you get started with this framework and make your first few steps easy. Here are some examples you can use.

ReactJs is remarkably equipped to develop state-of-the-art dashboards so that your customers can understand business analytics. These dashboards can be designed in proper format data, so they are easy to understand.

If you want to avoid unnecessary client-server requests, ReactJs is the solution. Numerous social media giants are using ReactJs to boost their applications.

Because ReactJs offers reusable components, you can have a significant advantage in building an e-commerce application. This helps you to save time and money.

React is one of the most popular libraries used to develop web applications. It has been employed by several big-name companies like Facebook and Netflix for their user interfaces, resulting in better performance rates than what was previously seen on these platforms!

Facebook uses the React library to build its site. The social media company has made this decision because it offers many benefits, such as faster development times, which means happier developers!

Ever since its launch in 2010, Instagram has been one of the most popular social media platforms – it has over a billion monthly active users. What many people don’t know is that the Instagram app is built using ReactJs. Its features, like Google Maps and search engines, are built on ReactJS features.

When it comes to front-end development frameworks, ReactJS stands out due to its focus on speed and performance, as well as its ease of use and scalability. Thanks to its component-based structure and powerful tools, developers can quickly start building dynamic user interfaces without having to worry about complicated configuration files or setting up a build environment.

For website owners interested in creating an intuitive online experience for their visitors, ReactJS provides an excellent solution! If you’re looking for ReactJs developers, reach out to Esketchers.