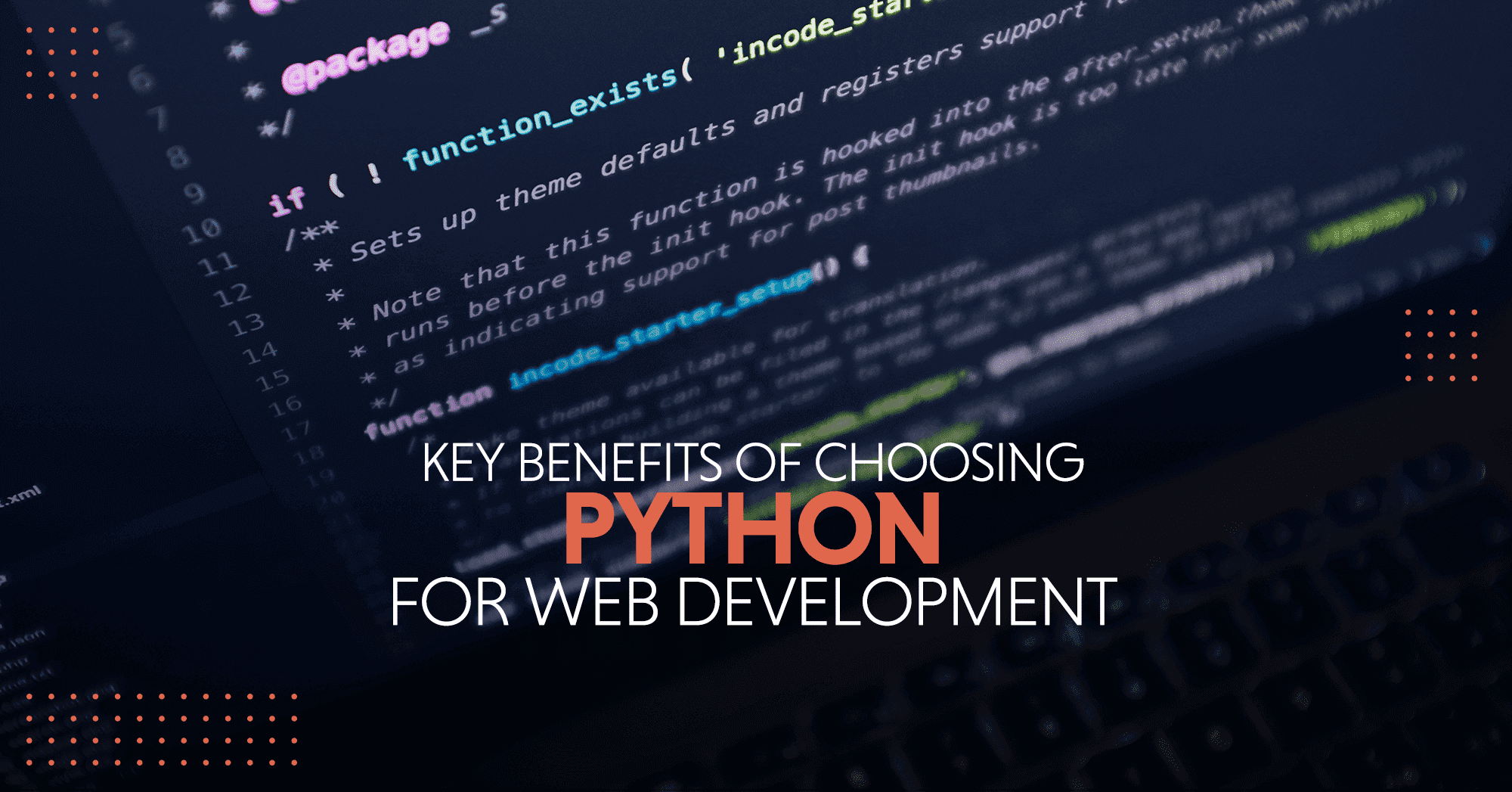 What Are The Benefits of Choosing Python For Web Development

Now, we are going to discuss Python for web development which has cult status on web application development frameworks, due to its flexibility and robustness. Due to the rise in artificial intelligence, machine learning, and data analysis, many developers utilize Python for its easy-to-learn syntax, portability, powerful and abundant libraries.

Why Use Python For Web Development?

Python is a high-level, multi-paradigm general-purpose programming language. In web development, we use Python in the backend as a hidden business logic layer with some other frontend language (mostly like JavaScript) to build a responsive web application. The significant reason behind using Python for web development is quite simple: it’s a versatile, adaptable, and highly efficient language that supports garbage collection and dynamic typing capabilities.

The distinguishing factor to use this language is availability.  It is open-source that means easy to use and distribute. We can use learn this language in short from its free documentation. These benefits of Python make it a popular and emerging multi-paradigm programming language. Here is some statistical analysis of 2020-21 about the most popular programming languages from the professional software industry. 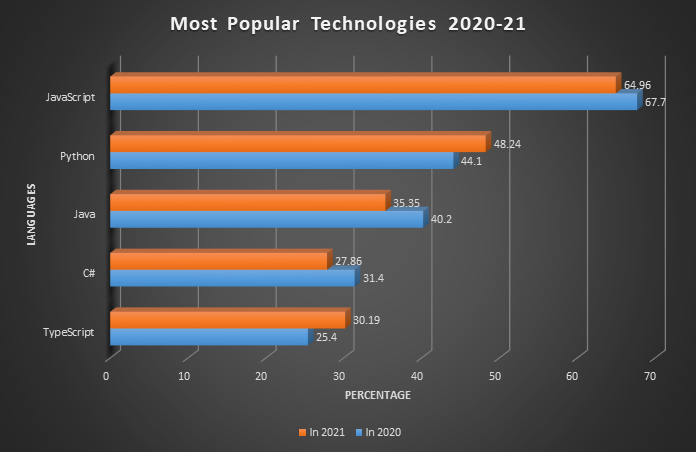 Benefits of Python for Web Development

Good scrutability: It has a simple syntax and easy to learn programming language. it is just like a simple English language which means developers can write understandable source code.

Easy to grasp: Python code is easy to understand and if you are facing any issue or having some error it’s easy to find someone with the same error or problem with some solution. It is all because of its popularity among the developers.

Complex tasks on the back-end: It helps to tackle heavy projects (Scientific and Numeric Applications) in a very efficient manner using libraries like NumPy etc. We have different frameworks related to different domains and depending on our needs.

Data Analysis and Visualization: It has a wide variety of visualization tools, built-in libraries, and frameworks to generate statistical analysis and reports. To visualize data there are multiple frameworks like Seaborn, matplotlib, where we can draw Scatter plots, Piecharts, Bar plots, and more.

Wide range of libraries: Being an open-source project, Python has multiple build-in libraries related to different problem domains. Python efficiently speeds up the data processing and shows relevant results in no time in comparison with Java and R.

Versatile Frameworks: The fact is that Python is a multi-purpose programming language and versatile. We can change and use it according to our approach and needs. We can use it for Web development, Web scraping, Data visualization, Data processing, AI and machine learning, Computer graphics, Big data, Game development, and more.

There are several frameworks for web development in Python. We are going to discuss renowned ones.

If you are familiar with java Spring MVC or .Net, Django almost works on the same principle model–view–controller. Now, Let’s look into the MVT software design pattern which helps to handle databases at the data access layer. Django is also one of the major causes through which Python become famous in a few years. Due to the open-source project among the Python developer community, it is expanding steadily and is not easy to master.

Why Django is the perfect framework for web apps?

Django is a high-level Python web framework for scalable, versatile, and secure web application development. As a software development company, we love to use Django in our projects because of its clean and practical design. It encourages a rapid application development process that allows targeting clean code in a short period. Let’s have look at some rocking features of Django.

Django has a massive global community of developers and students. They contribute by developing innovative plugins and tools to make app development effortless. People from around the globe share their findings with others that resultantly improve the community and make it easy to learn. You can discuss your project with community developers to get done your project and get pro tips and suggestions.

Let’s consider you are working on a project and have some questions regarding problem-solving or Django syntax. You can discuss your project with community developers to accomplish your task without going into a deadlock, and you will also get some pro tips and suggestions. Your problem and its provided solution will also help other developers in the future. Hence it’s one of the reasons behind the success of any technology.

As Python can be used to forge server-side web app development. Flask is also one of the renowned back-end, micro web application development frameworks used for scalable but micro-level app development. The major intensions to develop flask was to design and implement micro APIs in projects easily.

For instance, I am a data scientist and I want to implement an API to fetch some data online from multiple resources and process them. As Django is not easy to learn in a short time So, in this scenario, Flask will be the better option for rapid API development.

TurboGears is a Python framework for web app development. Just like Struts, Java Spring MVC, .Net and Ruby on Rails, it follows model–view–controller (MVC) architecture. MVC is a software engineering design pattern for developing user interfaces that divide core business software logic into three interconnected components abbreviated as MVC. TurboGears is a standalone WSGI web framework that can act as a full-stack framework like Django or a micro-framework like Flask.

What is Tornado in Python?

Tornado is an open-source scalable, asynchronous, non-blocking network I/O web application framework. It was written in Python by FriendFeed, a social aggregator web application created in 2007. The utmost reason behind Tornado popularity is its design and performance. Therefore, it can handle tons of concurrent connections. This Python framework is different from others because it allows asynchronous processes and runs one thread per process.

Now, are going to create our first web application by using the Django framework in Python. You have to follow the steps below to create your first Django web app. 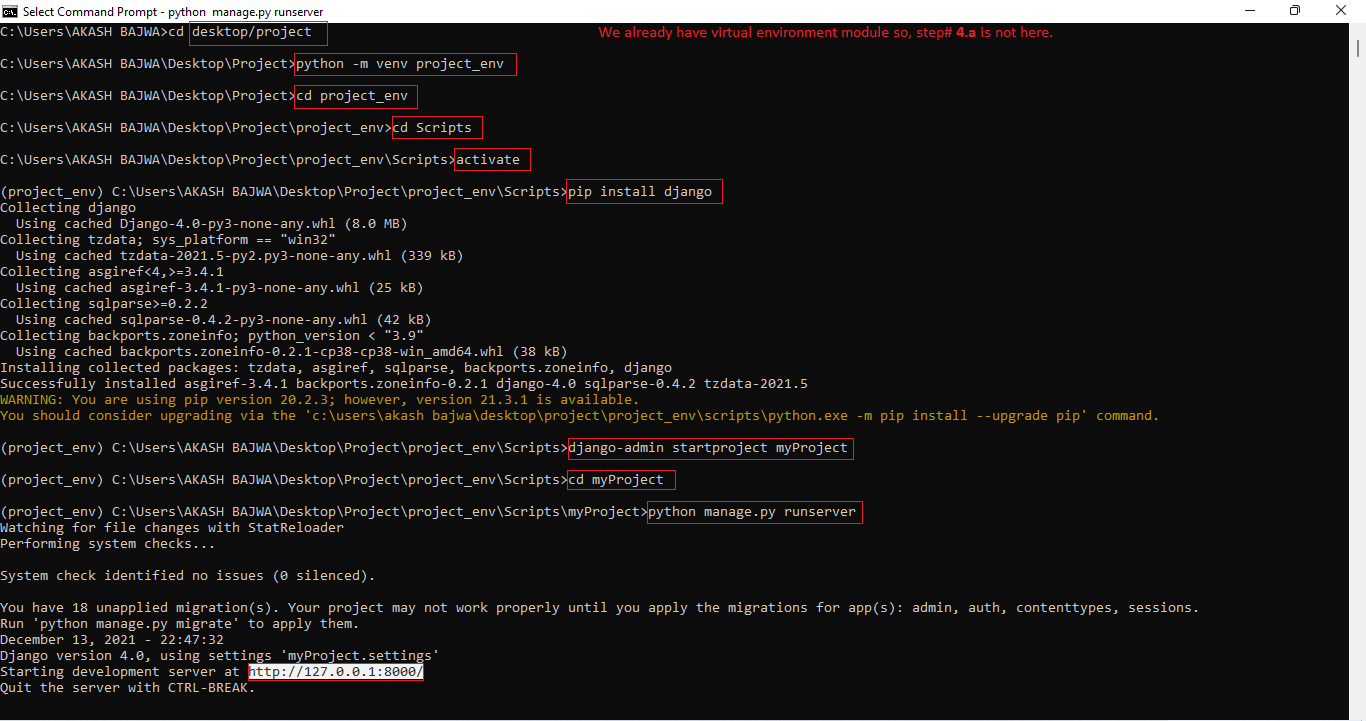 Python for web development is indomitable to make dynamic and scalable applications. Undoubtedly, you can safely use it for your application development because of its built-in frameworks and highly active dev community. You can ask for help from the python developers community if you are stuck somewhere in your project, which is a huge advantage.

Python for web development is a perfect match to push your emerging startup towards growth in skyrocketing competition. Startups have a better chance of growth and stability with the right choice of technology.

So if you are aiming to deliver or build a state of the art product then using the Django framework will be one of your smartest decisions. Esketchers specializes in Python and Javascript development, contact us and we will assign an adequate team of Django developers to work endlessly to meet the goals.